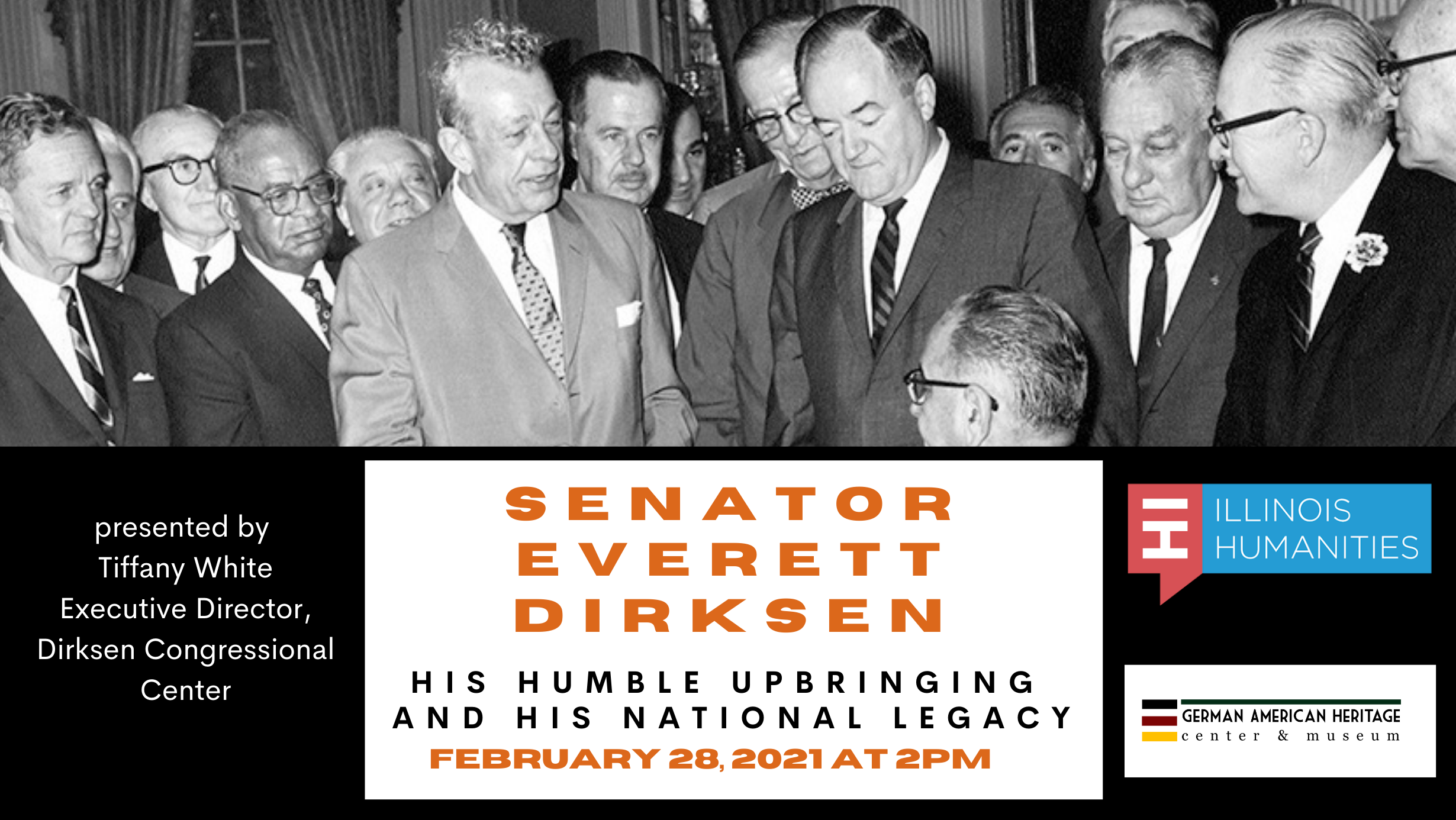 Senator Everett McKinley Dirksen was born in Pekin IL in 1896 to a first-generation German immigrant. Though he experienced an exceptionally humble Midwestern upbringing with more than its fair share of adversity, he rose to national prominence throughout his nearly four-decades tenure in the US Congress. With a larger-than-life personality, he was well-known for his speaking ability and unparalleled use of language to persuade and to inspire. He used these talents—among others—to become to most essential influence in the passage of the Civil Rights Act of 1964.
In response to a reporter’s question about why he had taken such a lead role in the Civil Rights Act, he remarked: “I come from immigrant German stock. My mother stood on Ellis Island as a child of 17, with a tag around her neck directing that she be sent to Pekin, Illinois. Our family had opportunities in Illinois, and the essence of what we’re trying to do in the Civil Rights bill is to see that others have opportunities in this country.”

The presentation is free, but donations are greatly appreciated.

Tiffany White currently serves as the Executive Director of the Dirksen Congressional Center, located in Everett McKinley Dirksen’s hometown of Pekin, IL. Everett Dirksen served in the US House and US Senate throughout the course of nearly four decades, and was the Senate’s Republican Minority Leader from 1959 until his death in 1969. He is best known for his indispensable role in ushering into law the Civil Rights Act of 1964. The Center is a non-partisan, not-for-profit organization with a mission to enhance the public’s understanding of Congress, its people, and its policies.

Before assuming leadership of the Center in 2019, White served as Chief of Staff to Illinois State Representative Mike Unes. Previously, she was the Executive Director of Pekin Main Street, and also served for five years on staff in the 18th Congressional District office, where she managed immigration and State Department-related casework.

White is a 2008 graduate of the University of Illinois at Urbana Champaign, and a 2005 graduate of Pekin Community High School. She acquired a Bachelor’s Degree in Political Science and Speech Communication, with minor concentrations in both American History and American Religious Studies. She is a 2010 Graduate of the R. David Tebben Leadership School (named after her late father and former Mayor of Pekin), and a member of the 2018 class of Peoria Magazine’s 40 Leaders Under Forty.

White and her husband Ben live in Pekin with their three daughters: Jane (6), Claire (4), and Molly (1). White’s hobbies include playing the piano, following the US Supreme Court, curating her best possible family life, and collecting dresses. She is an enthusiastic supporter of Fine Arts, and a devoted member of St. Paul United Church of Christ in Pekin.

Her approach to life is dedicated to Teddy Roosevelt’s famous saying, that the best prize life has to offer is the chance to work hard at work worth doing. 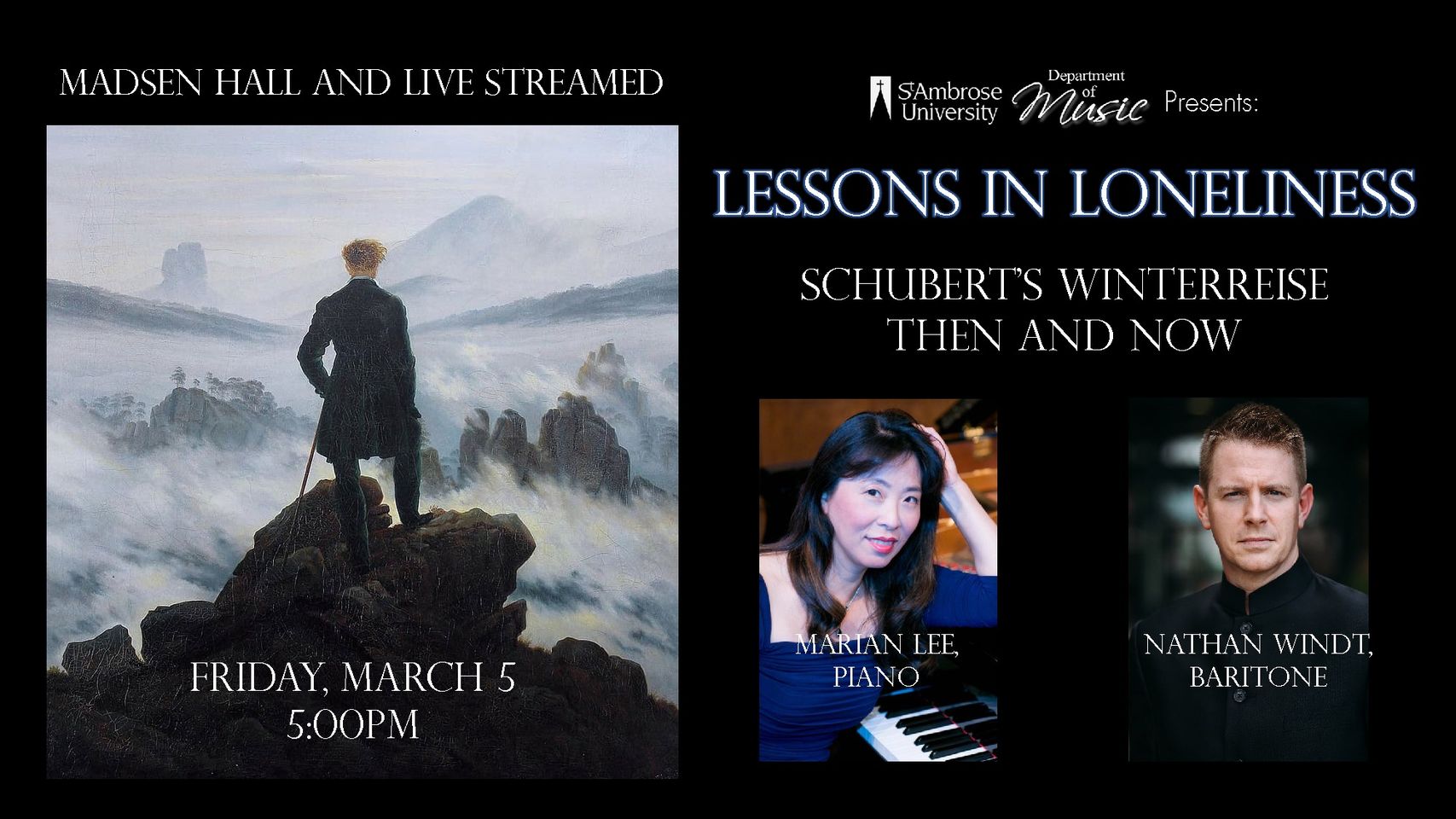 Franz Schubert’s Winterreise is considered by many to be the pinnacle of the German song-cycle repertoire. Written nearly 200 years ago, it may seem that the story of a wanderer making sense of his place in the world without love is just a love story gone wrong.

However, as we approach one year of living in a pandemic, the wanderer’s feelings of isolation and loneliness seem more relevant today than perhaps at any point in our lives.

Join SAU Music faculty, baritone Nathan Windt and pianist Marian Lee, as they perform excerpts from the cycle, and discuss the connection between the wanderer’s struggles and our own today, and how to (try to) make sense of our place in this world. SAU's Counseling Center will also provide resource links after the event for those struggling with issues of isolation, loneliness, or other mental health needs.

Join us on Sunday, March 7, 2021, at 2 pm for "The Fall of Berlin." Kevin Braafladt, Army Sustainment Command Historian, will discuss the strategic level fighting leading up to the last days of the war surrounding Berlin and the surrender negotiations with between the Allies and the German government that officially ended the war in Europe.

This presentation will be live streamed using Zoom software on Eventbrite.

This event is free to the public. Donations are greatly appreciated.

A link to this event will be sent to your email from Eventbrite. Please keep an eye on your inbox and spam box for this email. 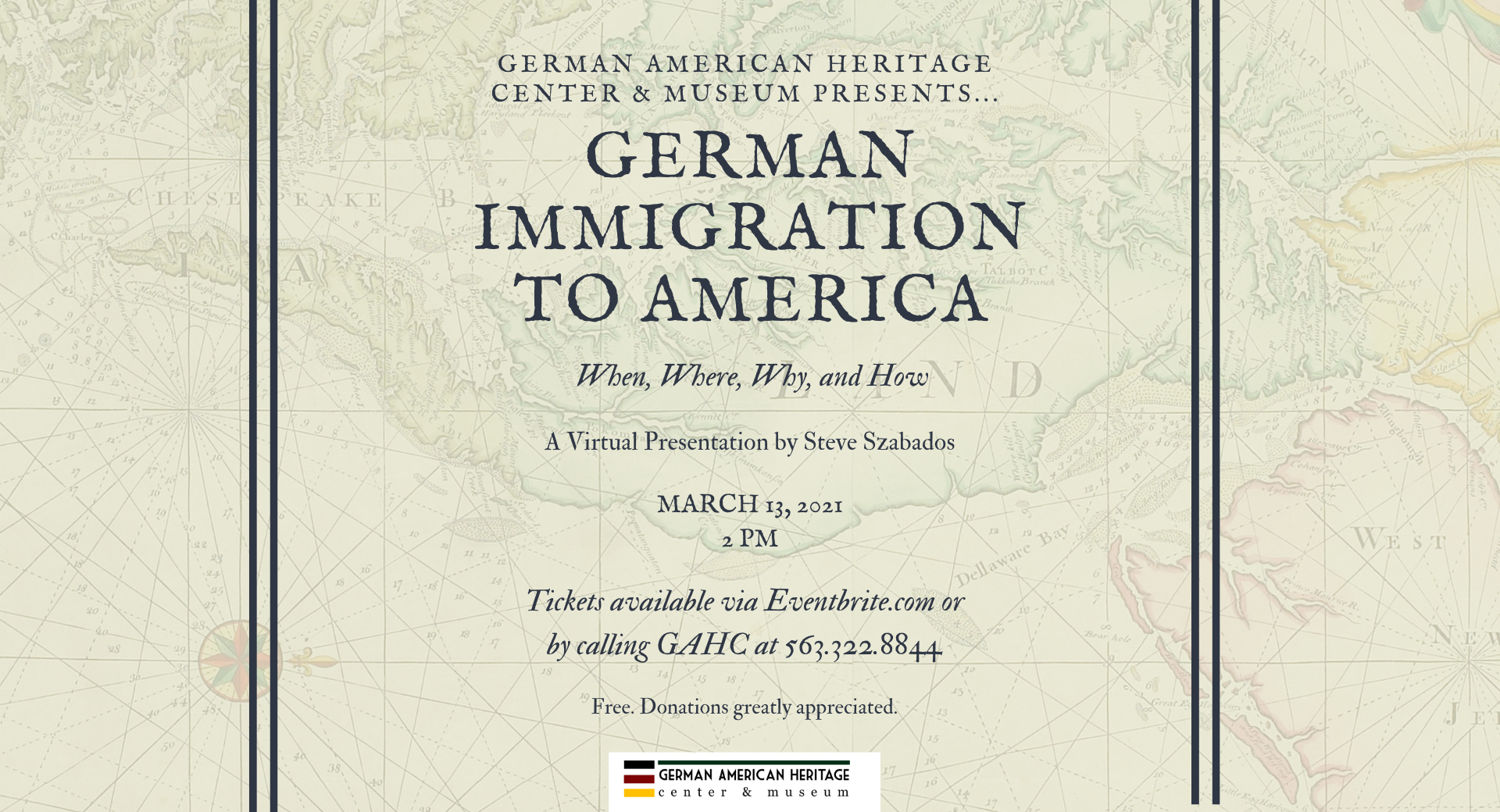 Join us online on Saturday, March 13, 2021 at 2 PM for "German Immigration to America", a virtual presentation by Steve Szabados.
When did your ancestors immigrate, where did they leave, why did they leave, how did they get here? These are questions we all hope to find the answers. This program studies how the history of Germany affected the immigration of our ancestors. This program should give insights into their immigration. The material will hopefully clear up your confusion about where and why your ancestors left and add exciting stories to your family histories.

This event will be streamed live with Zoom software on Eventbrite. Please keep an eye on your email for a link from Eventbrite.

This event is free to the public. Donations are greatly appreciated. 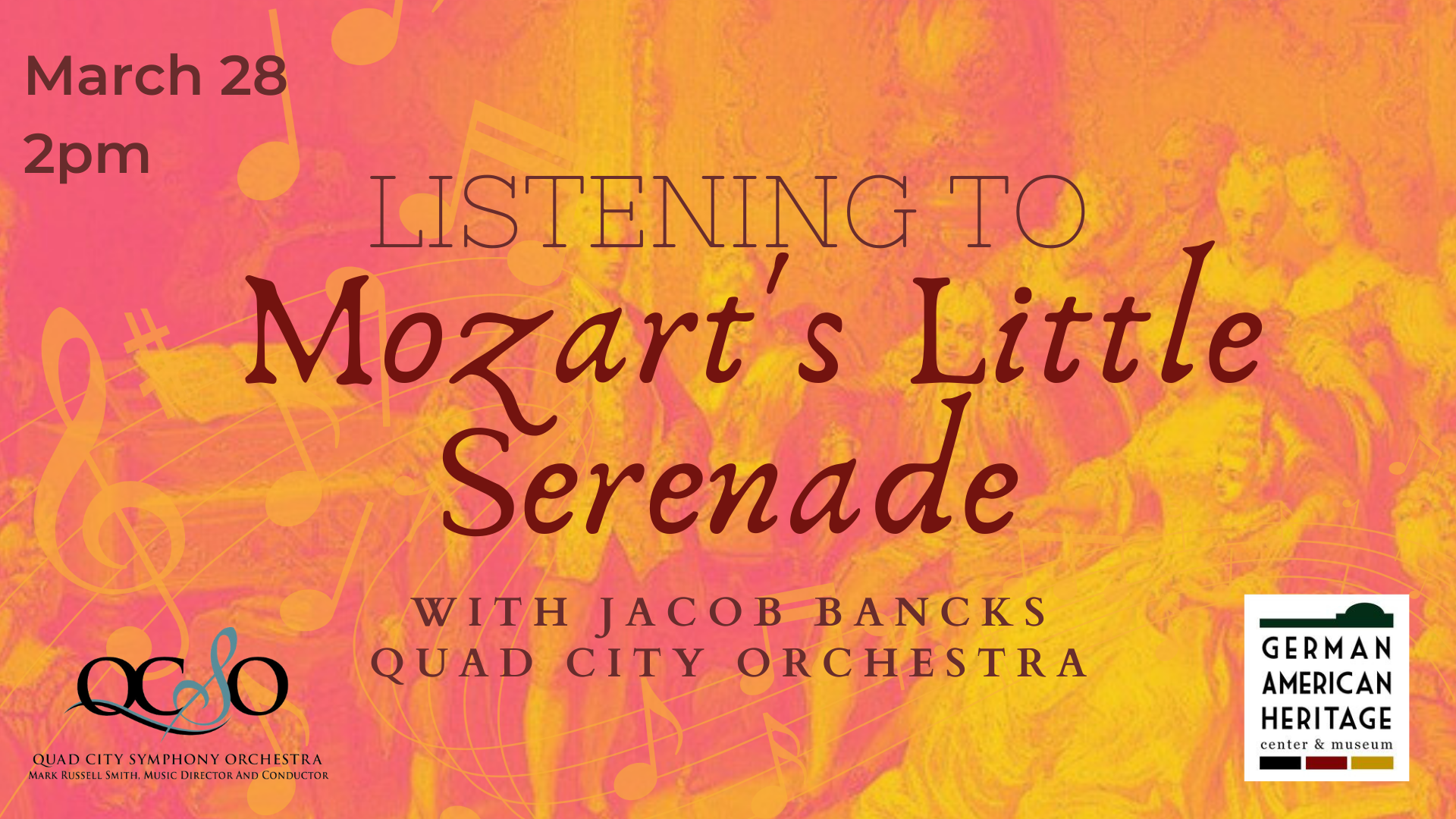 Do you love classical music, but sometimes wonder how to follow along? On March 6-7, the Quad City Symphony will perform one of the most recognizable works of classical music, Mozart's Eine Kleine Nachtmusik. We will use this much-loved piece of music to explore how to develop habits of listening to music.

About Jacob Bancks:
Praised as “colorfully orchestrated, invitingly lyrical” (The New York Times) and “highly caffeinated” (The Boston Globe), the music of Illinois composer Jacob Bancks (b. 1982) engages and inspires musicians and audiences around the world.
At the core of his output are works for orchestra, with performances by the St. Paul Chamber Orchestra, the Nashville Symphony, the Sarajevo Philharmonic, the Annapolis Symphony, the South Dakota Symphony, the Greater Twin Cities Youth Symphony, and the New York Youth Symphony. Other ensembles that have performed his works include eighth blackbird, Pacifica Quartet, American Modern Ensemble, Schola Antiqua of Chicago, Cantori New York, Eastman Wind Ensemble, OSSIA New Music, Kobe (Japan) City Philharmonic Chorus, Kyoto Gewandhaus Chor, and Spektral Quartet. Among his most significant projects are close and repeat collaborations with marimbist Makoto Nakura, mezzo-soprano Julia Bentley, pianist Kuang-Hao Huang, the United States Marine Band, and the Quad City Symphony.
Born in the small town of Fairmont, Minnesota, sin
ce 2011 he and his family have made their home in the Quad Cities, a community of Illinois and Iowa towns straddling the Mississippi River. There he makes many contributions to local musical life, serving as associate professor on the faculty of Augustana College, directing the choir of St. Paul the Apostle Catholic Church, writing program notes for the Quad Cities Symphony, lecturing on music at the German American Heritage Center, and co-hosting a monthly educational program on WVIK public radio. In addition to the QCSO, he has composed frequently for local ensembles, including the Moline High School Orchestra, the Quincy Symphony, and Trinity Episcopal Cathedral.
A 2019 recipient of an Illinois Arts Council Artist Fellowship, he has earned awards, honors, and commissions from the National Endowment for the Arts, the American Academy of Arts and Letters, BMI, the Tanglewood Festival of Contemporary Music, the U.S. Department of Education, Sigma Alpha Iota international music fraternity, Soli Deo Gloria, the Minnesota Commissioning Club, the International Double Reed Society, the Hanson Institute for American Music, and the Commission Project. Recordings of his music have been released by American Modern Recordings and broadcast on BBC Radio 3, American Public Media’s Performance Today, and WFMT-Chicago Classical Radio.

He studied composition with Shulamit Ran, Marta Ptaszynska, Carlos Sanchez-Gutierrez, Ricardo Zohn-Muldoon, David Liptak, and Augusta Read Thomas, and participated in masterclasses with Luca Francesconi and Louis Andreissen. Among his other important mentors are Cliff Colnot, Daniel Horn, and Ray and Sue Sidoti. He holds degrees from the University of Chicago, Eastman School of Music, and Wheaton College.
In 2021 the Quad City Symphony will stage his first opera Karkinos, co-commissioned by Living Proof Exhibit and inspired by over thirty in-person interviews with people whose lives have been impacted by cancer. Other current projects include a large cycle of solo piano music for pianist Kuang-Hao Huang and a concerto for clarinetist Ricardo Morales, co-commissioned by the Quad City Symphony and the Philadelphia Orchestra.

This event is free to the public, donations are appreciated.

This program will be presented via zoom. You will receive a link to the presentation via email from both eventbrite and GAHC. Please keep an eye on your inbox.

The presentation will last for roughly 45 minutes with a Q+A session afterwards.

For questions about programming at GAHC please email us at info@gahc.org or call us 563-322-8844 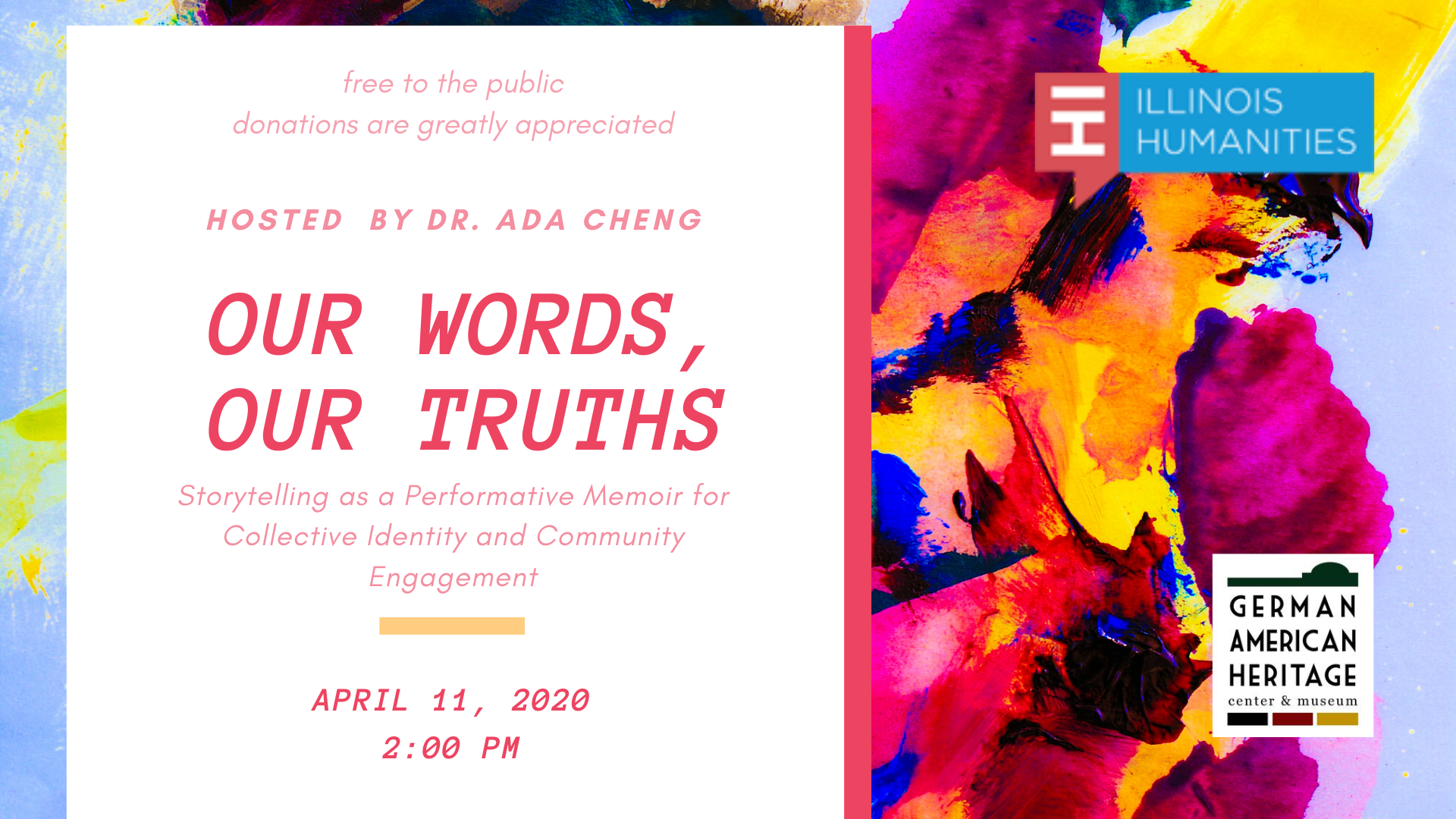 About Ada Cheng
Dr. Ada Cheng is a professor-turned-storyteller, solo performer, and storytelling show producer. She has been featured at storytelling shows and done her two solo performances all over the country. Ada is the producer and the host of five storytelling shows, including Pour One Out, Am I Man Enough?, Talk Stories: An Asian American/ Asian Diaspora Storytelling Show, Speaking Truths Series, and This Is America: Truths through My Body. She creates platforms for people to tell difficult and vulnerable stories as well as for communities who may not have the opportunities otherwise. She uses storytelling to illustrate structural inequities, engage social critiques, and build intimate spaces for community members. Her interests span multiple fields, including academia, storytelling/performance, and advocacy. Her motto: Make your life the best story you tell.

This presentation is virtual and streamed via Zoom on Eventbrite. Your link will be sent to you via email by Eventbrite. Please check your email and spam box.

This event is free to the public, but donations are greatly appreciated.

This program is presented with the support of Illinois Humanities. 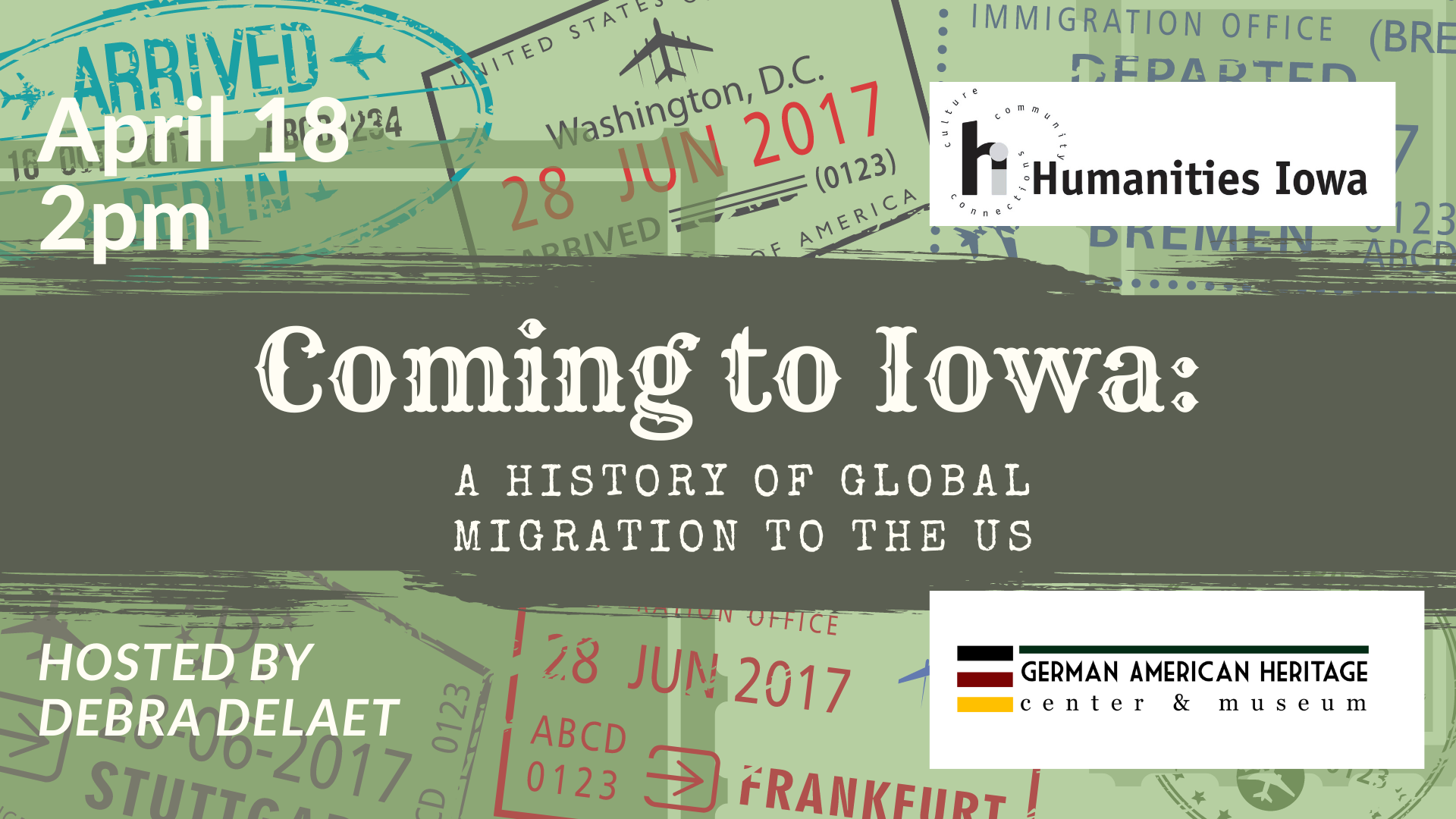 This presentation is brought to you by Humanities Iowa.

About the Speaker:
Debra L. DeLaet is Professor of Political Science at Drake University in Des Moines, Iowa. She serves as the David E. Maxwell Distinguished Professor of International Affairs. Her major research interests are in the area of human rights, global health and gender issues in world politics. She has published three books: U.S. Immigration Policy in an Age of Rights (Praeger 2000), The Global Struggle for Human Rights (Wadsworth, 2006) and (co-authored with David E. DeLaet) Global Health in the 21st Century: the Globalization of Disease and Wellness (Paradigm Publishers, 2012). In addition to these books, she has published numerous articles and book chapters in her areas of interest.