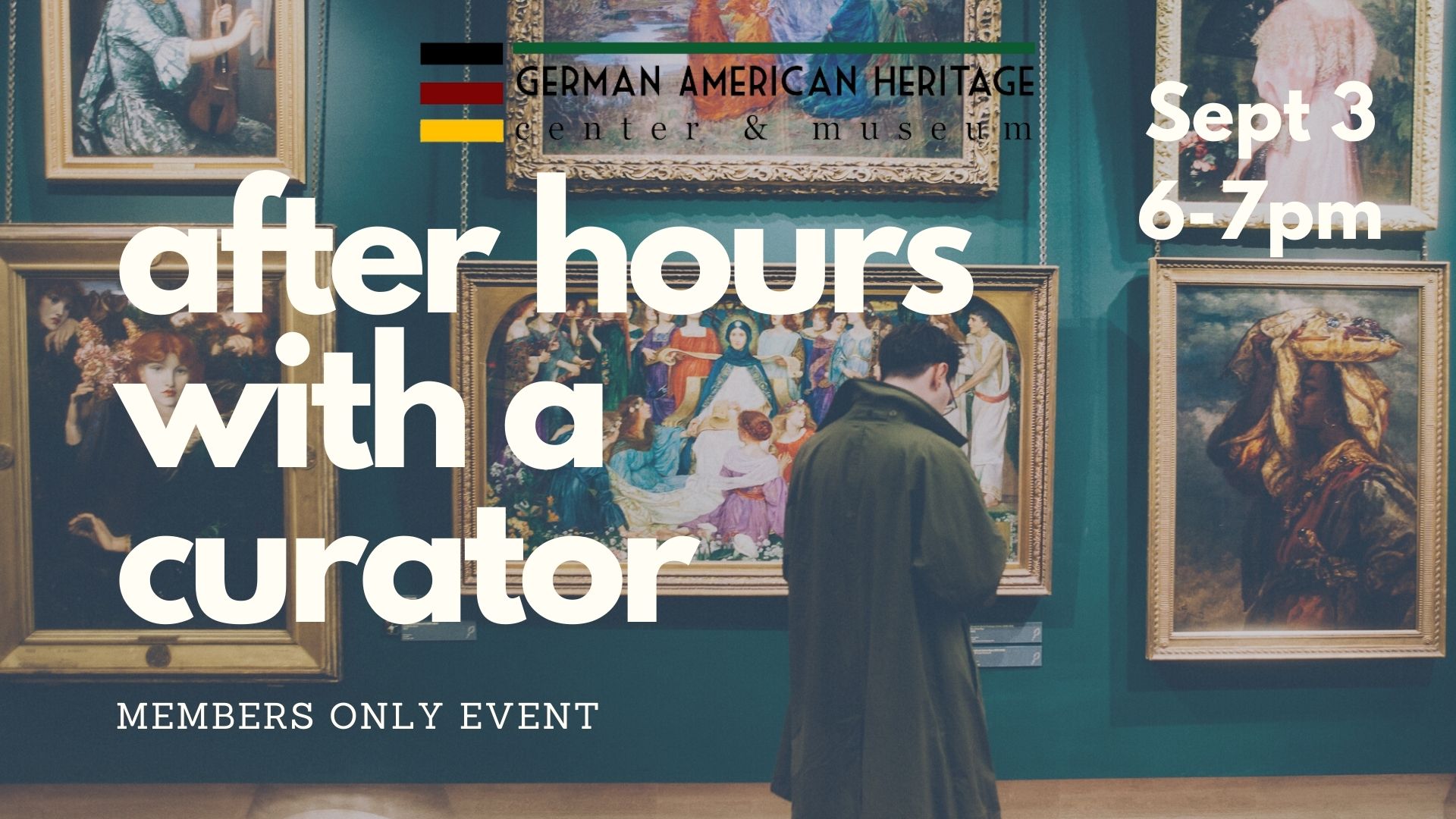 Join GAHC Assistant Director & Curator Erika Holshoe for an After Hours celebration of our newest exhibition: "Jugendstil: Art for All." This is a members-only event.

Jugendstil: Art for All explores the Art Nouveau artistic movement in Germany through the lens of different art forms, including fashion, interior design, and graphic design. The exhibition features works from Art Nouveau masters Aubrey Beardsley and Alphonse Mucha.

Erika Holshoe, curator of the new exhibition, will lead small behind-the-scenes group tours of the exhibition. Light refreshments and snacks will be served on the fourth floor of the GAHC. 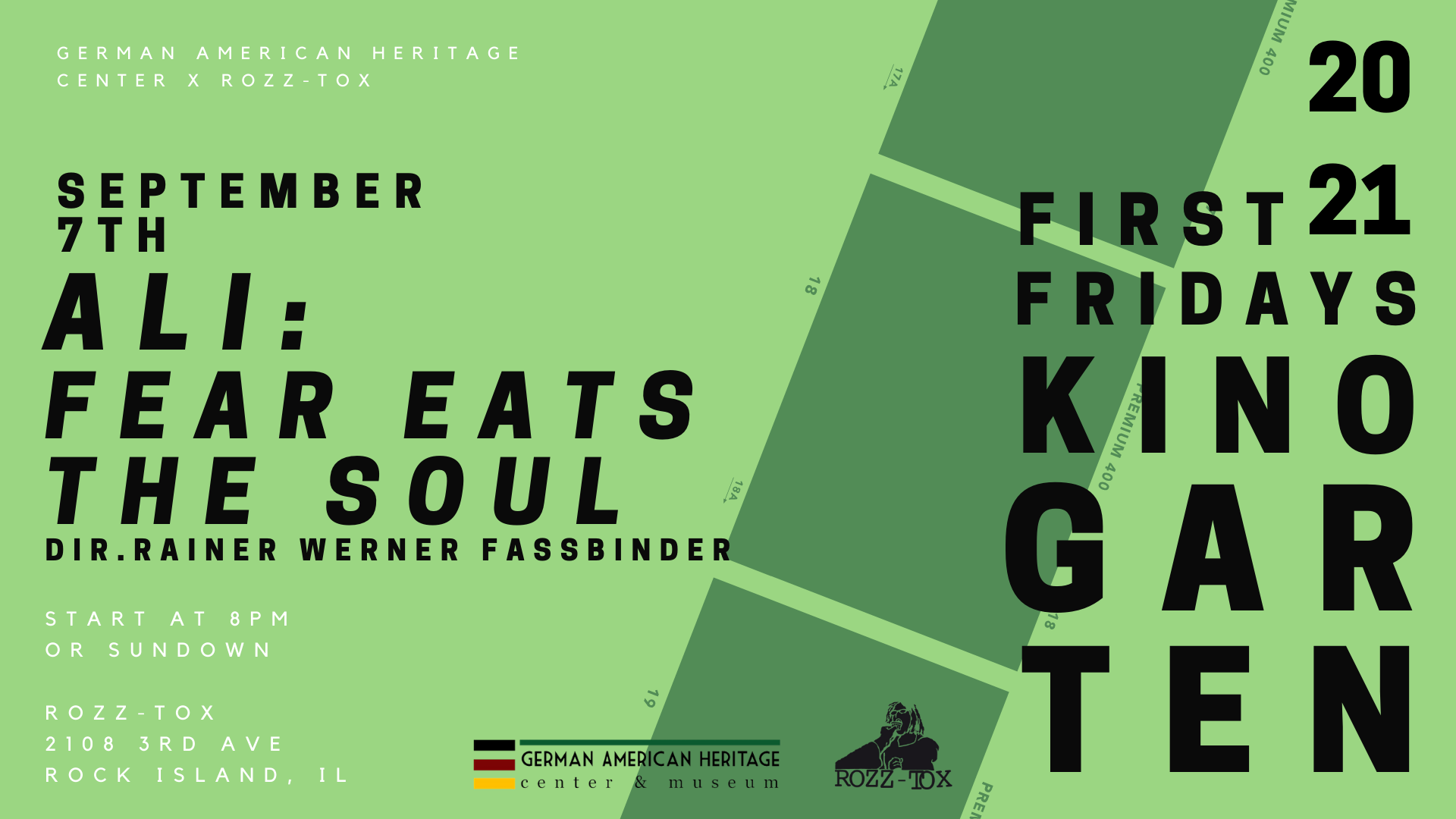 Join Rozz-Tox and the German American Heritage Center every first Friday at Rozz-Tox in downtown Rock Island for a German language film streamed outside in the Rozz-Tox “Kinogarten.”

Each film streaming is free and features English subtitles. No registration needed. Film will start at 8pm or sundown.

To keep our audience safe, film streaming will be socially distanced and guests are required to wear a mask.

Food and beverage will be available for purchase from Rozz-Tox (no outside food or drink please!)

To learn more about Kinogarten, please our websites or give us a call: 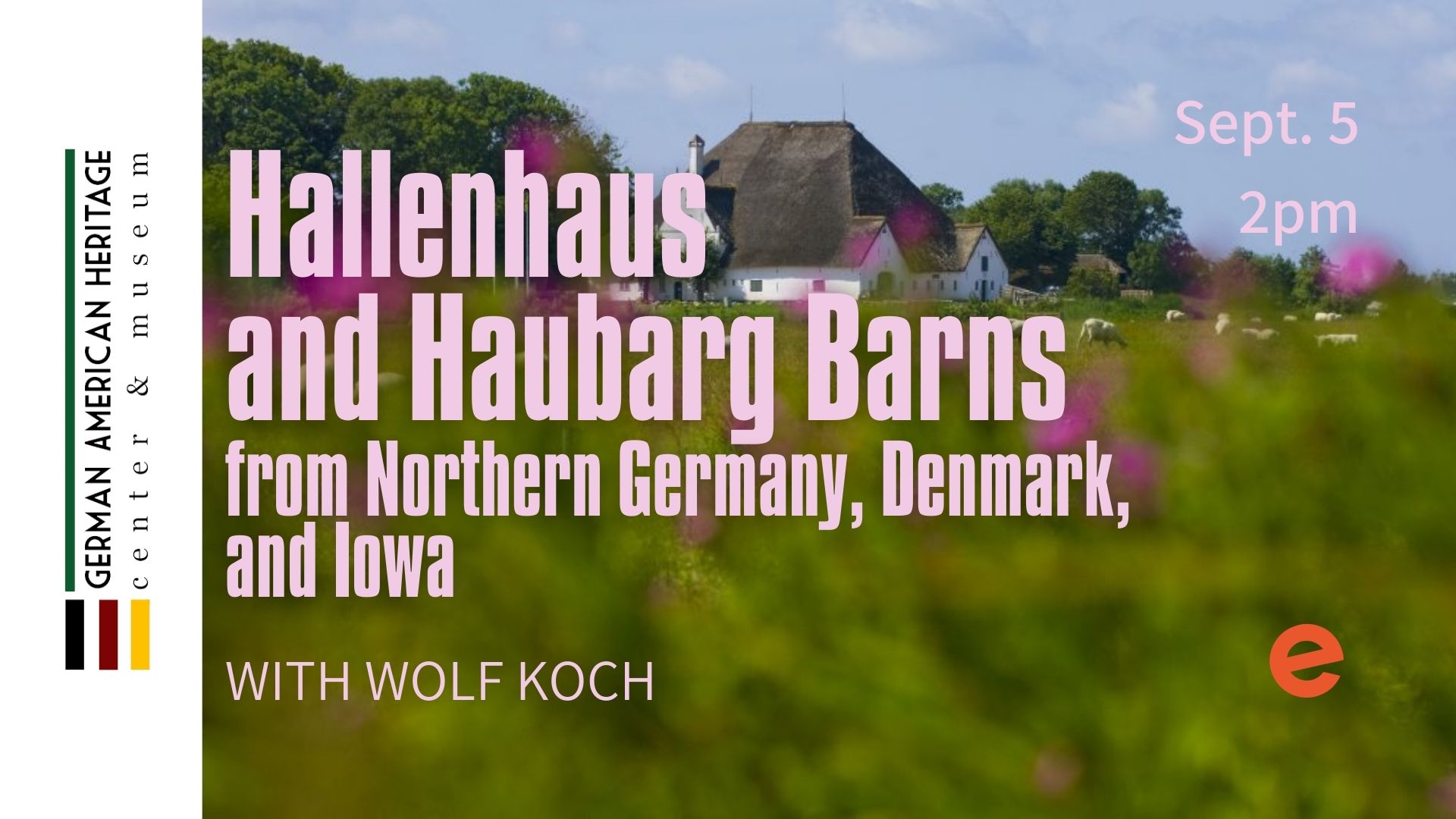 About the program:
Barns have fascinated Midwestern city folks for decades; local periodic barn tours tend to draw hundreds, sometimes thousands of visitors. Iowa has been blessed with citizen initiatives in two small towns to develop tourism opportunities by bringing existing historic German barns from the Schleswig-Holstein region to their towns: in 1996, Manning brought a large 1660 Hallenhaus barn (Hausbarn) from Klein Offenseth to Manning and reconstructed it as part of a Heritage Park. A decade later, DeWitt obtained a similar, but smaller, 1727 Hallenhaus from the village of Niebull and rebuilt it in the town center. Both barns had been slated for demolition at their original German locations prior to disassembly and shipment to this country, followed by renovations and reassembly by local volunteers led by German craftsmen. In addition to the two original German Hausbarns located in Iowa, an extensive collection of reconstructed early immigrant farmsteads, adapted to local conditions, are located at the Wisconsin Historical Society's Old World Wisconsin open air museum in Eagle, Wisconsin.

This presentation will provide a short overview of the farmstead and construction in various parts of Germany and concentrate on the specific Hausbarns found in northern Germany and Denmark, the Hallenhaus and Haubarg farmsteads. While both the Manning and DeWitt barns are Hallenhäuser, (plural of Hallenhaus), there are no Haubarg type barns in this country -- in fact, there are only about 100 of these very large barns left in Germany and Denmark. The presentation will explore these traditional European farmsteads and compare them to those built later by German and Scandinavian immigrants here in the Midwest.

About the presenter:
Wolf Koch grew up in Oberwinter, a small town dating back to 886, located in Germany's Rhine Valley halfway between Cologne and Koblenz. He arrived in this country some 60 years ago; a decade later, he was back in Germany for five years as an officer in the US Air Force and has been back on business and family visits almost annually. During his childhood, Wolf spent most school vacations on farms owned by siblings of both his grandfathers and became quite familiar with everyday life on small German farms. He and his wife have been frequent visitors to both Iowa Hallenhäuser as well as Old World Wisconsin since 1978. Four years ago, they spent part of a vacation living in a Hallenhaus close to Husum, Germany, as well as a day visiting and photographing the Rote Haubarg, one of the largest, operating now as a restaurant and museum.

Wolf's previous presentations include capturing the Remagen Bridge and commemorating the end of World War II; how a mapping mistake resulted in a new republic in the middle of Rhine Valley in 1919; the 500-year anniversary of the Reformation; the life of Hildegard von Bingen, as well as various local historic and photography topics. He and his wife Linnea travel extensively; their interest in history has taken them to many European historical sites. Locally, they have given many talks on the Hopewell civilization in the Rock River Valley. Dr. Koch, a Sterling resident, is a consultant to the oil and petrochemical industries; he has been a professor of chemical engineering and lectures on energy related topics and historical events. Linnea Koch, a graphic designer specializing in exhibit design and interpretive signage is an accomplished photographer who has documented a decade of local barn tours via multimedia presentations. Together, they teach photography seminars and give presentations on wildlife photography.

Note: This program will occur in-person at the German American Heritage Center in downtown Davenport. There is no virtual option at this time. 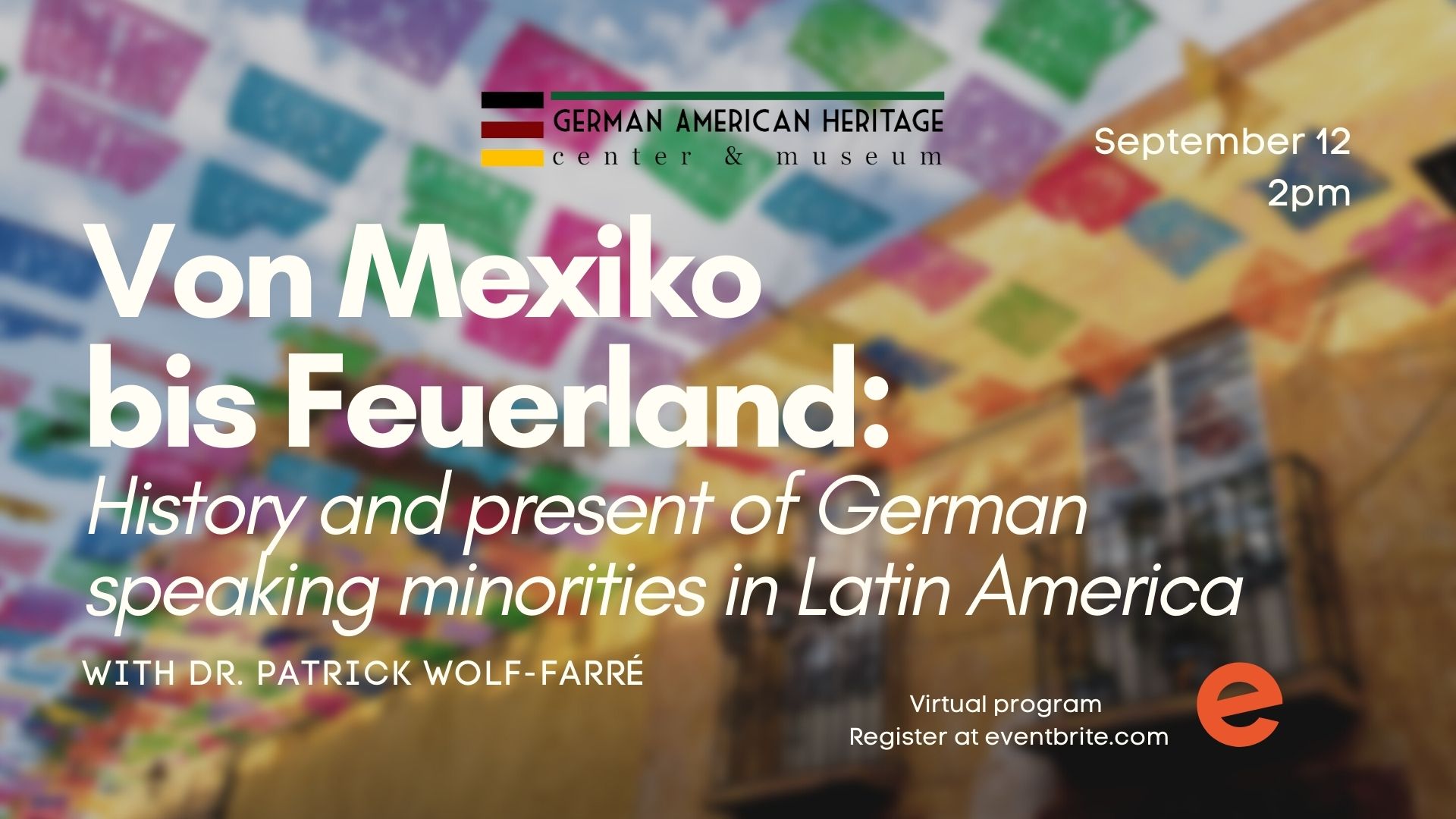 This program will examine the history and situation of German speaking immigration to Latin America, comparing and contrasting with German immigration to North America. 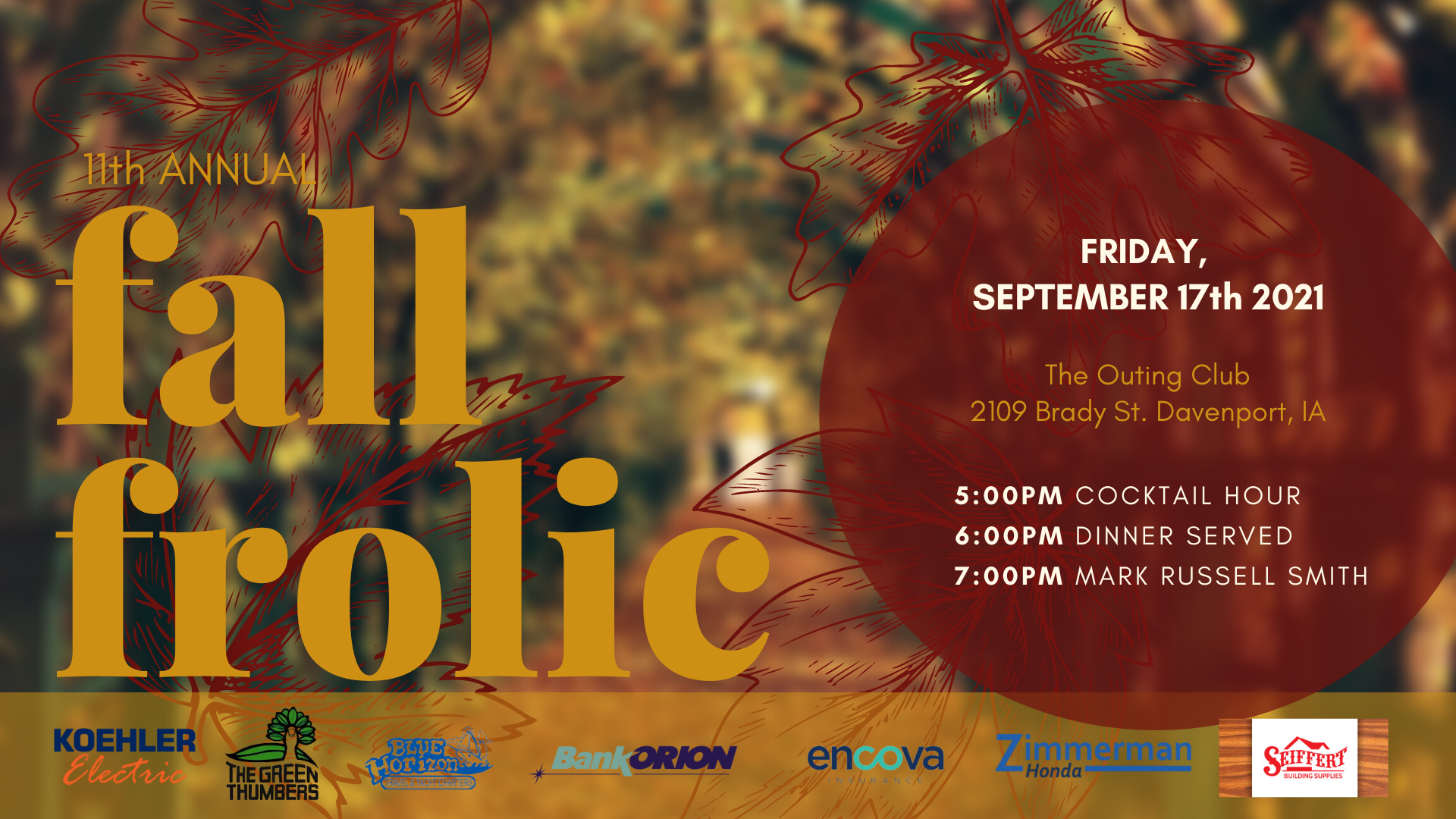 We kindly invite you to join us at the 11th Annual Fall Frolic Gala on Friday, September 17th at 5pm at the Outing Club in Davenport.

This year we are excited to host Maestro Mark Russell Smith as he addresses our members and friends! Enjoy live music from a string quartet of musicians of the Quad City Symphony Orchestra, delicious German plated dinner, and a silent auction in celebration of a love of German culture and heritage- all while supporting the Center's educational programs, outreach, and exhibitions. Tickets for the in-person event are $55 per person.

If you are unable to partake in this year's fête, consider a Fall Frolic from Home option! $75 per person- dinner, mix CD of MRS's favorite performances, and a special exhibition catalog. Or for $30 per person choose a desert, exhibition catalog, and mix CD. Simply drive through the Outing Club that evening for curbside delivery, details to follow. We hope to make this special night inclusive for all! 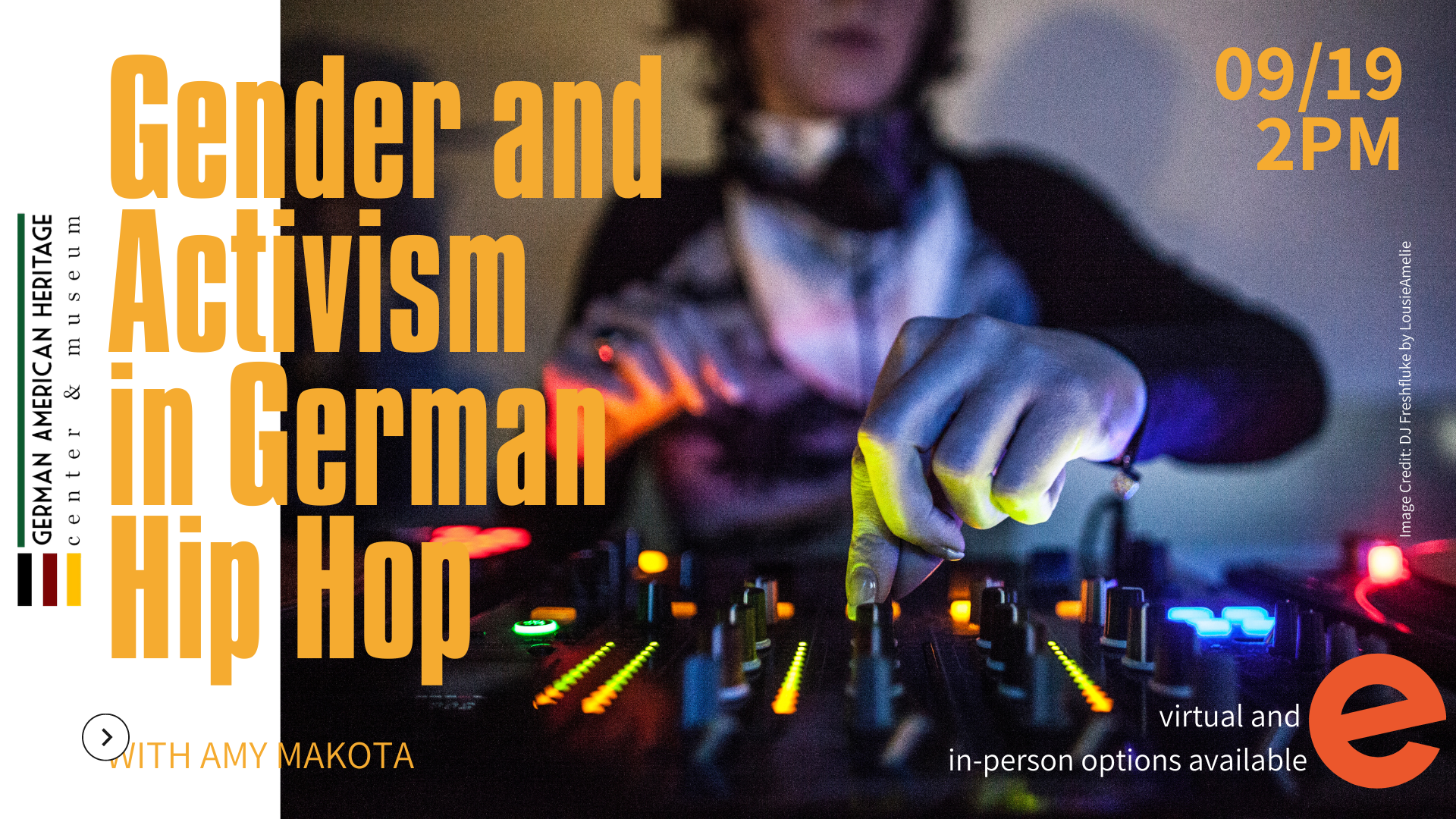 The cost of this program is $5 per person (non-members). Free admission for members.*

This program is virtual.

Eventbrite will provide a link to join the program via email- keep an eye on your spambox please!

For those interested in an in-person experience- the GAHC is happy to offer a screening of the event in-person. The screening will take place on the 4th floor at the exact time of the program. Seating is limited and socially distanced. Masking is required. To select this option, please purchase an "In-Person" ticket at check out.

About the program:
This presentation examines the activism methodologies of women* hip hop performers in Germany to address the question, "In what ways does German hip hop activism contribute to and/or realign the social and political landscape of contemporary Germany?" Promoting their chosen socio-political issues through their social media presence and live performances, these artists also affiliate with public demonstrations against racial and gender discrimination, urban gentrification and LGBTQIA+ inequities. By analyzing the platforms women* hip hop performers align themselves with, their motivations for public association with their issues, and the particular ways they utilize their art as support, this talk explores the ways these artists' activism furthers their chosen causes while simultaneously exposing tension regarding gender and feminist politics.

About the presenter:
Amy Makota is a doctoral candidate in the Department of Folklore and Ethnomusicology at Indiana University in Bloomington, Indiana, USA. She obtained her 2013 B.A. in English with minors in West European Studies, German, Medieval Studies, and Creative Writing, and her 2017 M.A. in West European Studies. Her interest in Germany began in her youth with the discovery that her paternal ancestors were German American immigrants. To date, she has resided in Berlin during multiple stages of her fieldwork process, with the most recent being in late 2020 and mid-2021. Amy's forthcoming dissertation focuses on Gender and Activism in German hip hop.

*The GAHC is dedicated to providing access to quality educational and cultural programming. The GAHC has recently decided to resume charging for programs. We apologize for any confusion or inconvenience. As always, GAHC members receive free admission to all programming. To learn more about memberships, visit https://gahc.org/joingive/memberships/ 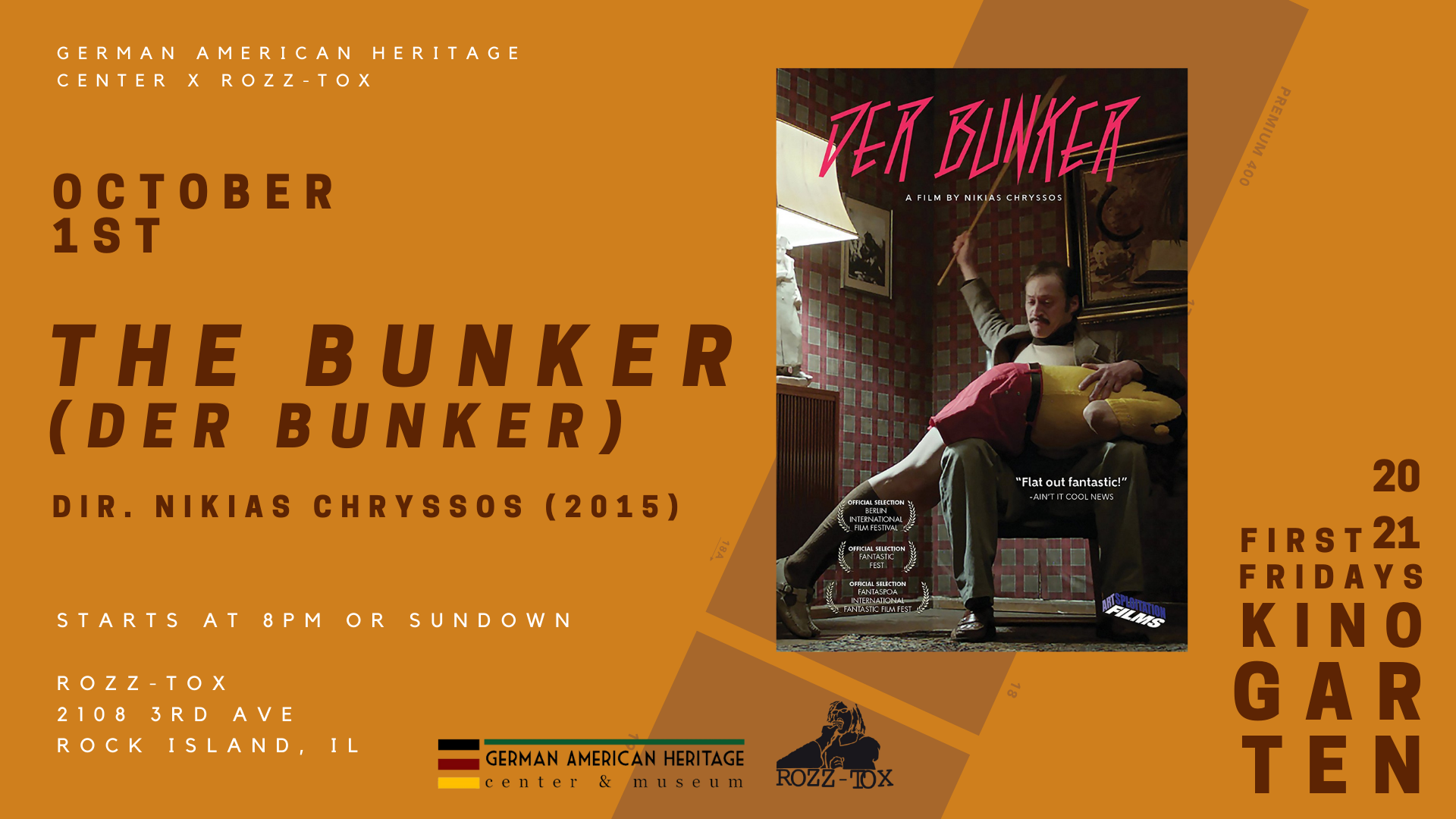 Join the German American Heritage Center & Museum at Rozz-Tox for a special, spooky Kinogarten on October 1st at 8pm!

"Der Bunker" is a 2015 horror-comedy film by Nikias Chryssos. It centers around a student who rents a room in a lake side house... which turns out to be a bunker with a very strange family living in it. This film is rated R.

Rozz-Tox will be serving Oktoberfest Festbier from Marz Brewing in Chicago. Standard Rozz-Tox beverages and food also available for purchase!

This film screening is free to the public.

Screening will occur outdoors, but may move indoors due to inclement weather. Please note that masking is requiring while indoors at Rozz-Tox, Rock Island. 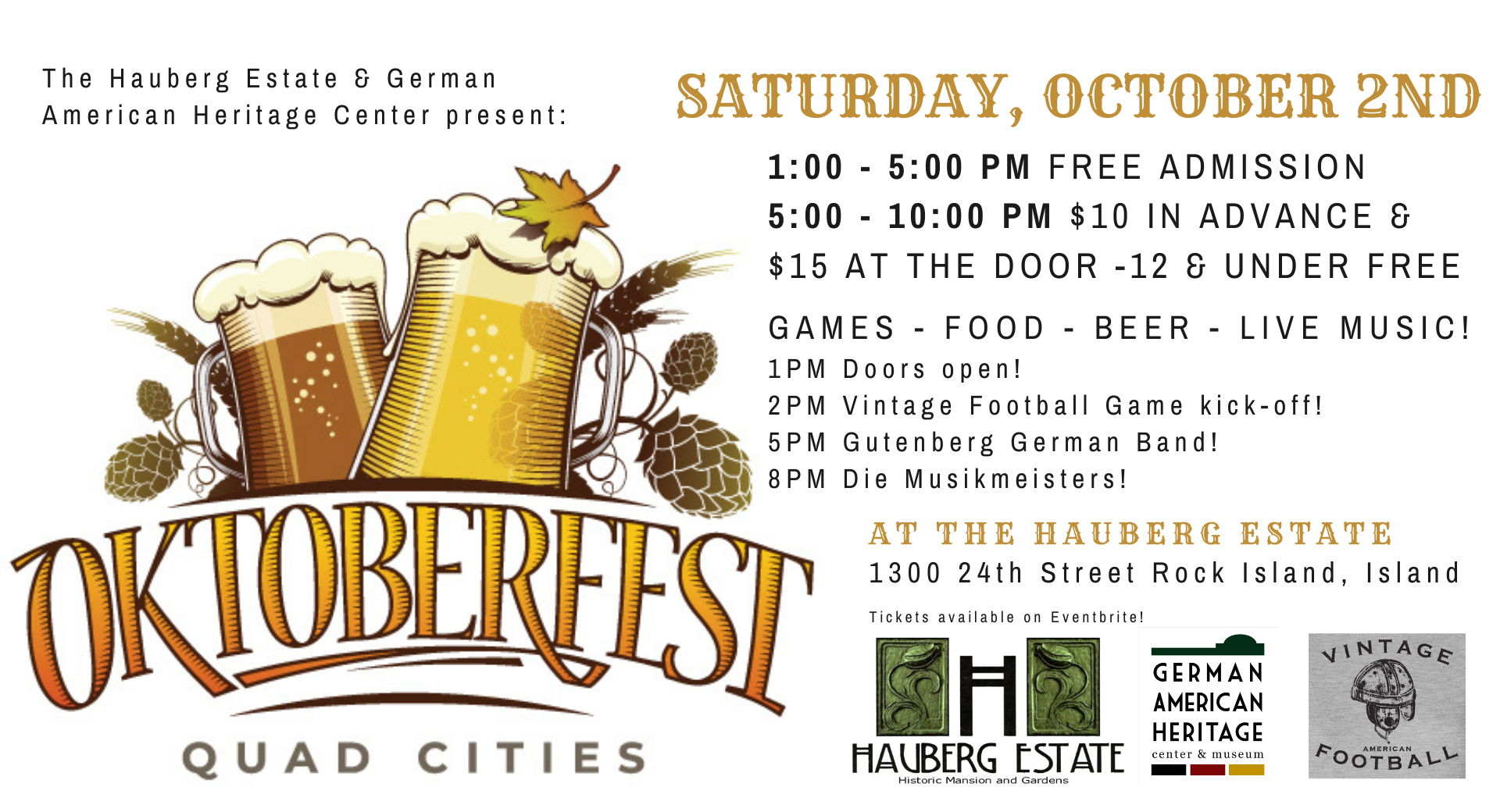 Join us at the Hauberg Estate on Saturday, October 2, 2021, from 1 PM to 10 PM for the First Annual Oktoberfest Quad Cities! Kid's activities offered from 1 PM to 7 PM and vintage football game kickoff at 2 PM. Live music with the Guttenberg German Band begins at 5 PM and Die Musikmeisters go on at 8 PM. Food and beer will be available for purchase. Wear your best Oktoberfest finery for a chance to be crowned King & Queen of Oktoberfest QC! 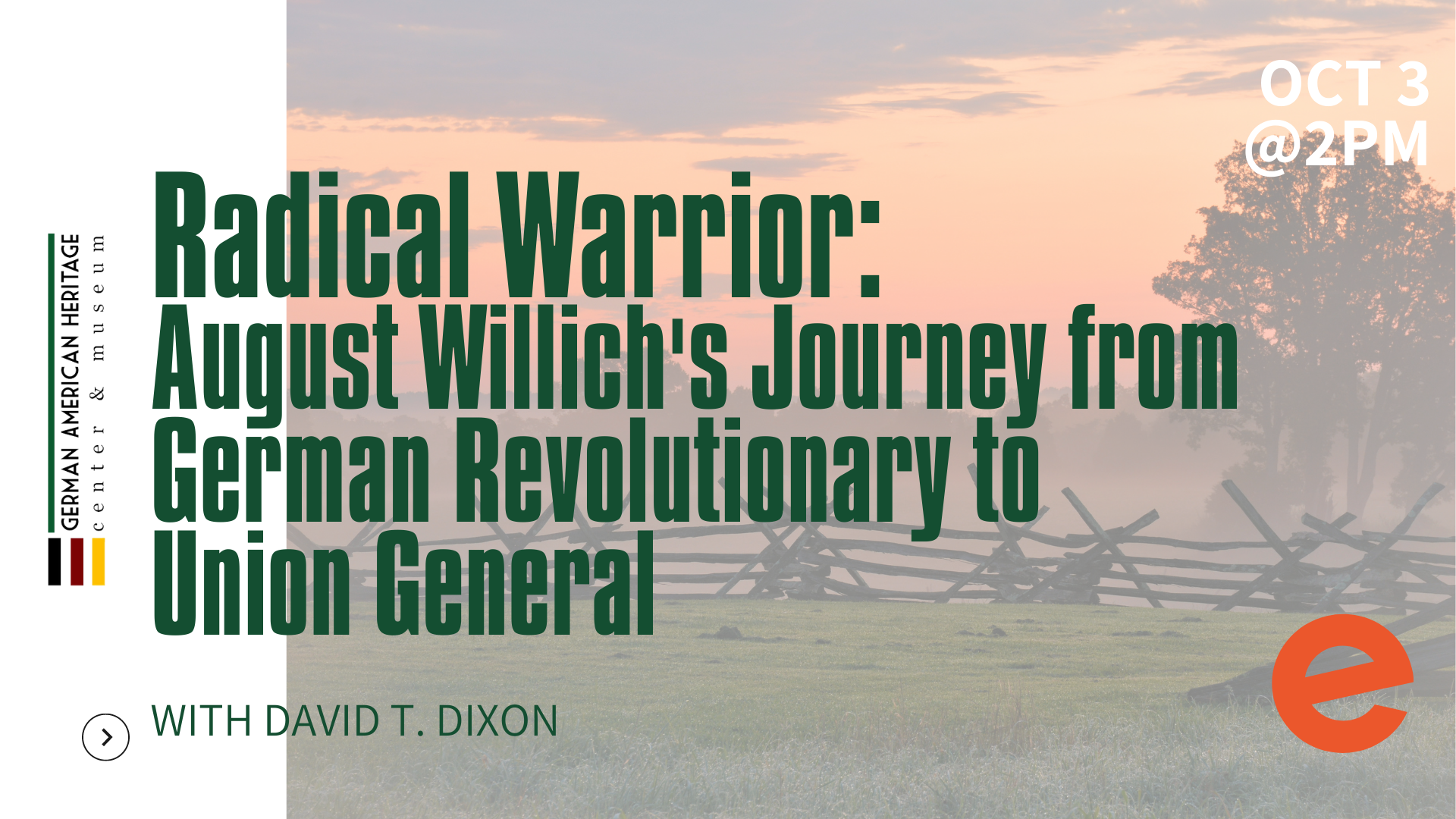 Join us in-person at the GAHC on October 3rd at 2pm for a book talk and signing with author and historian David T. Dixon. He will discuss his new book "Radical Warrior: August Wilich's Journey from German Revoltuionary to Union General" (University of Tennessee Press, 2020). Copies will be available for purchase.

Ticket Costs:
Free for Members
$5 per person for non-Members

This program will be socially distanced. Masking is required. Hand sanitizing stations will be available throughout the GAHC.

About the program:
Radical Warrior: August Willich’s Journey from German Revolutionary to Union General (University of Tennessee Press 2020) is the biography of a Prussian army officer who renounced his nobility and joined in the failed European revolutions of 1848. He emigrated to America, edited a daily labor newspaper in Cincinnati, and became one of the most accomplished generals in the Union Army. This story sheds new light on the contributions of 200,000 German-Americans who fought for the Union in the Civil War.
In an age of global social, economic, and political upheaval, transatlantic radicals helped affect America’s second great revolution. For many recent immigrants, the nature and implications of that revolution turned not on Lincoln’s conservative goal of maintaining the national Union, but on issues of social justice, including slavery, free labor, and popular self-government. The Civil War was not simply a war to end sectional divides, but to restore the soul of the nation, revive the hopes of democrats worldwide, and defend human rights.

About the presenter:
David Dixon earned his M.A. in history from the University of Massachusetts in 2003. His first book, The Lost Gettysburg Address, told the unusual life story of Texas slaveholder Charles Anderson, whose speech followed Lincoln’s at Gettysburg, but was never published. It turned up 140 years later in a cardboard box in Wyoming.
David has given nearly 100 talks to audiences across the country. He appeared on Civil War Talk Radio and other podcasts. He hosts B-List History, a website that features obscure characters and their compelling stories. You may download free pdf versions of his published articles on that website at www.davidtdixon.com.
David’s new book, published by the University of Tennessee Press, is the biography of German revolutionary and Union General August Willich. His work highlights the contributions of approximately 200,000 German-American immigrants to the Union effort in the Civil War. Transatlantic radicals like Willich viewed the war as part of a much larger, global revolution for social justice and republican government.