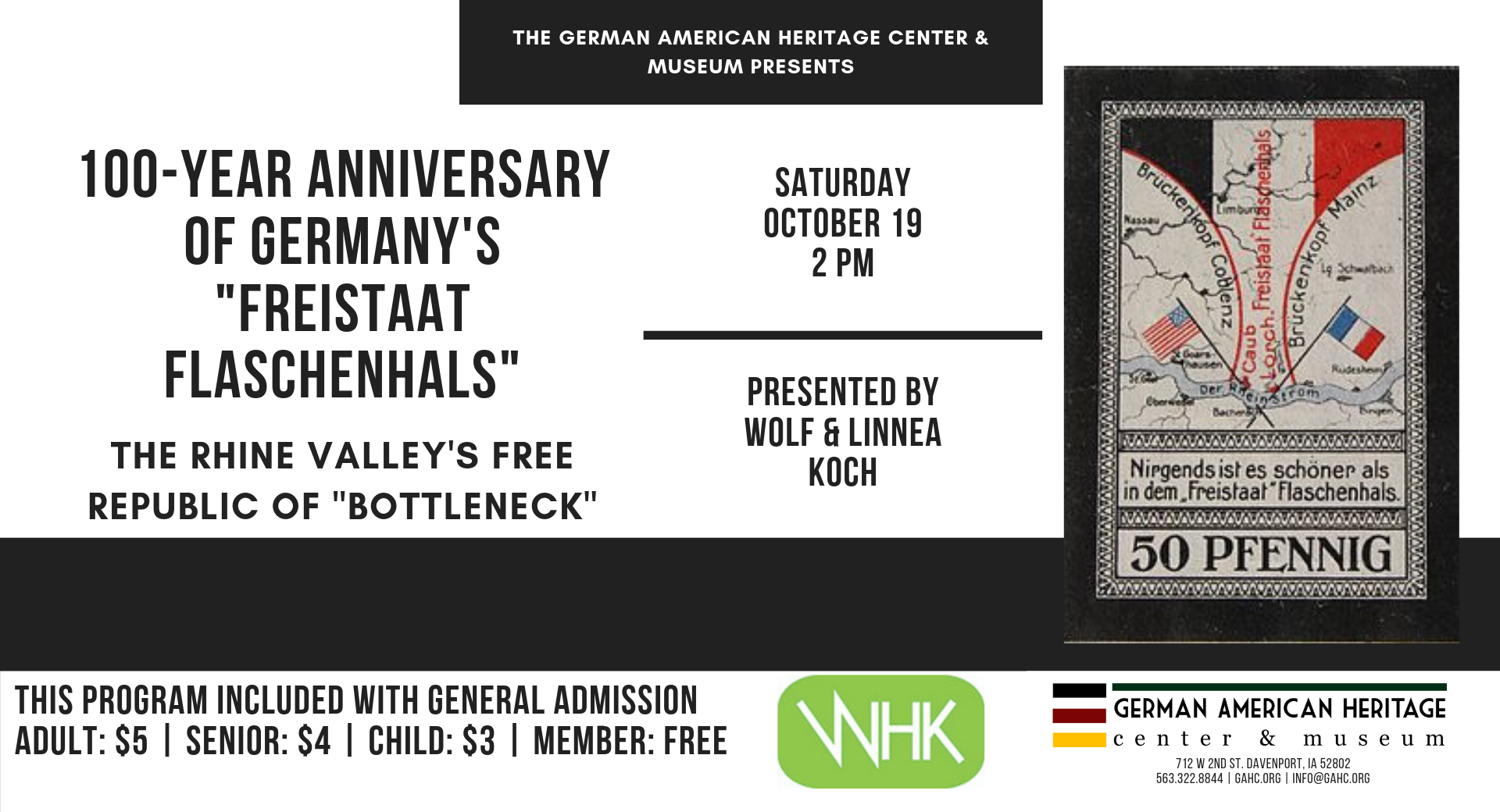 Join us on Saturday, October 19th at 2pm for a talk by Wolf and Linnea Koch about the 100-Year Anniversary of Germany’s “Freistaat Flaschenhals” – The Rhine Valley’s Free Republic of “Bottleneck.”

History is full of coincidences and accidents which may result in major consequences or none at all. This is the story of an insignificant bureaucratic mistake resulting in the declaration of a new republic inthe middle Rhine valley: World War I ended on November 11, 1918 with the Armistice of Compiègne; the 100-year anniversary of the event was commemorated throughout Europe last year. The Armistice agreement required the withdrawal of all German forces to the east bank of the Rhine, Allied occupation of the Rhineland, and Allied bridgeheads surrounding Cologne, Koblenz and Mainz extending east of the river. These Allied bridgeheads were mandated to have a 30-kilometer radius, with British forces controlling Cologne, American forces Koblenz and French forces Mainz.
Unfortunately, while these bridgeheads were supposed to overlap, Allied experts had failed to notice that the Koblenz-Mainz corridors did not, resulting in a narrow strip of no-mans-land shaped like a bottleneck with a width of less than 0.5 miles at its most narrow point, stretching from south of Lorch to north of Kaub along the Rhine and extending east to Limburg into the rest of Germany. The region included 11 towns with about 17,000 people, which were now isolated on three sides by the river and the Allied bridgehead borders, with no roads or other infrastructure connecting them to the rest of Germany.
While post-war shortages of food and coal existed throughout most of Germany, they became especially severe in this isolated region. As a parital solution to the escalating problem, the mayor of Lorch, Edmund Pnischeck, declared the area to be independent and proclaimed the “Freistaat Flaschenhals,” the Free Republic of Flaschenhals (Bottleneck), on January 10, 1919. During the next four years, the region became the center for smuggling goods, providing a black market outlet for wine production otherwise controlled by the French and necessary staples for area inhabitants. While the French wanted to annex the region to their bridgehead, they were prevented by the U.S.-controlled Koblenz bridgehead administration until 1923 when they occupied the Rhine regiondue to a lack of war reparation payments by the Weimar Republic.
This presentation will trace the events leading to the formation of the “Freistaat Flaschenhals,” explore the years it operated as an important region for black market operations in post-war Germany during the formation of the Weimar Republic, and will finish with the current 100-year anniversary of the declaration and its impact on promoting local tourism. Information on this rather bizarre, but interesting part of the history of the Rhine Valley has been preserved in local archives in the form of photos, documents and currency printed by the Freistaat Flaschenhals.

Wolf Koch grew up in the Rhine Valley in Oberwinter, a small town dating back to 886, located halfway between Cologne and Koblenz. He has previously prepared presentations commemorating the end of World War II, the 500-year anniversary of the Reformation, and covered various local historic as well as photography topics. He and his wife Linnea travel extensively; their interest in history has taken them to many historical sites in European countries, covering the period between the Stone Age and medieval times. Locally, they have been studying accounts of the Hopewell civilization, have traveled to many mound builder sites in Ohio, Iowa and Illinois and given many talks on the Hopewell civilization in the Rock River Valley. Dr. Koch, a Sterling resident, is a consultant to the oil and petrochemical industry and has been a professor of chemical engineering. Linnea Koch, a graphic designer specializing in exhibit design and interpretive signage is an accomplished photographer.